Perspective of a scientist: Genetics of spinocerebellar ataxia type 19/22

Spinocerebellar ataxia type 19/22 (SCA19/22) is characterized by a late-onset, slowly progressive, mild cerebellar ataxia. In 2002, we mapped the SCA19/22 gene in a large Dutch family and it took another 10 years before the gene and corresponding mutation was identified using next-generation sequencing technologies. We and others identified missense mutations in KCND3 to cause SCA19/22. KCND3 encodes a voltage gated potassium channel Kv4.3 that is important for transient outward potassium currents. More recently a new class of genetic variations has been identified in KCND3 to cause a neurodevelopmental disorder including ataxia. These de novo mutations are located at more critical positions in the Kv4.3 protein structure compared to heritable SCA19/22 mutations and thus can exert a more deleterious effect on channel function. Additional investigations are ongoing to understand why these de novo mutations lead to a different phenotypical outcome than SCA19/22 mutations. 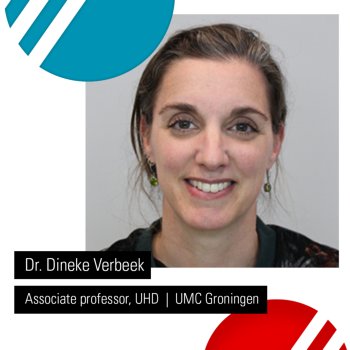 Dineke Verbeek received a M.Sc degree in Medical Biology and a PhD degree in Neurogenetics from the University of Utrecht in 2000 and 2005, respectively. In 2004, she joined the Neurogenetics Branch of the National Institute of Health in Bethesda, USA via a predoctoral fellowship award. In 2005 she joined the Department of Medical Biology of the Academic Medical Center in Amsterdam. Since 2008, she is within the Department of Genetics at the University Medical Center Groningen, University of Groningen, where she is associate professor (Tenure Track) and holds a Rosalind Franklin Fellowship. Her research centers on functional neurogenetics, with focus on rare movement disorders. Her group aims to understand the genetic, molecular and cellular mechanisms underlying rare movement disorders including ataxia, dystonia and familial Parkinson’s disease. With this work she anticipates to contribute to improve current genetic diagnostics and ultimately the development of therapies.