3D printing and planning in oncology: A research overview of the NKI-AvL and UT collaboration

The Verwelius 3D Lab was co-founded by Maarten van Alphen (technical medicine) and Robert van Veen (applied physics) in 2017 and is a research and implementation group within the Head and Neck surgery and oncology department of the NKI-AvL. The primary goal was to investigate and implement 3D technology in Head and Neck Surgery for improved aesthetical and functional outcome, and to improve to patients’ quality of life. In addition, 3D technology can also be employed for intra-operative surgical guidance in order to ensure clear margins.

Anaplastology was one of the first focus areas. 3D imaging and computer-aided designing (CAD) of the prosthesis is currently successfully being implemented in the workflow.

In this presentation an overview will be given on the application of 3D surgical planning and 3D printing in oncology at the NKI-AvL. A vast majority of the research and implementation is carried out by trainees, graduation and PhD Technical Medicine students. 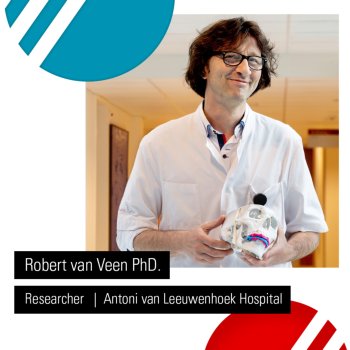 Robert van Veen (07-04-1971) received his engineers’ diploma in the field of Applied Physics (Photonics) at the The Hague University in 1998 followed by his Bachelor in Science degree (Physics) at the Free University in Amsterdam. Parallel to his study he started working at the Center of Optical Diagnostics and Therapy at the ErasmusMC in Rotterdam. In 2006 he received his Ph.D. The thesis was entitled “In vivo Optical measurements for Diagnostics and Monitoring of treatment”. In 2006 he was granted an NWO-STW project and became a VENI laureate. After completion he worked at the UMC Utrecht for a year on the topic Real-time Hybrid imaging in Nuclear Medicine. In 2015 he continued his Photodynamic Therapy (PDT) Dosimetry studies at the Netherlands Cancer Institute-Antoni van Leeuwenhoek hospital. In 2017 he co-founded the Verwelius 3D Lab. The lab focusses on 3D based technologies in oncology.