Assessment of vascular flow patterns is clinically important as they are related to progression of various vascular diseases and also to failure modes of endovascular treatment, through mechanisms such as recirculating flow and low wall shear stress. Imaging of vascular flow patterns is technically demanding, due to the often complex flow patterns. In vitro, flow 2D flow can reliably be assessed using laser-based Particle Image Velocimetry (LaserPIV), but accurate blood flow quantification is not yet used in clinical practice, while several techniques have been developed. These techniques might impact clinical decision making and improve the outcomes of interventions. These techniques include novel ultrasound based methods (echoPIV), Phase-Contrast Magnetic Resonance Imaging (PC-MRI) and Computational Fluid dynamics (CFD), with all having their pro’s and con’s. 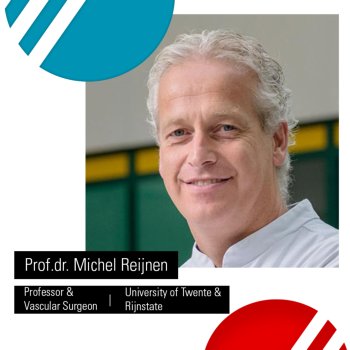 Michel Reijnen completed his (endo)vascular training in January 2004 and joined the Rijnstate Hospital in Arnhem as staff vascular surgeon in 2007, where he works in a team of 5 vascular surgeons and 5 interventional radiologists. He is involved in multiple trials in the endovascular area and initiator and principal investigator of various (inter)national multicenter randomized trials and Registries. Michel Reijnen is professor ‘Endovascular Imaging and Innovation’, at the Multi-Modality Medical Imaging group of the University of Twente, Enschede. He has published over 250 peer reviewed manuscripts and book chapters and is reviewer of several journals and a regular faculty member of several international symposia. As the course director of surgical residents until 2017 and, having organized multiple workshops in the endovascular field, he has a profound interest and experience in surgical training.